O’Reilly Automotive (NASDAQ:ORLY)‘s stock had its “buy” rating restated by stock analysts at Evercore ISI in a report released on Monday, AnalystRatings.com reports.

In An Industry Where Growth Can Happen Fast. This Tech Stock Is Pleading Its Case!

O’Reilly Automotive (NASDAQ:ORLY) last posted its quarterly earnings results on Tuesday, April 27th. The specialty retailer reported $7.06 earnings per share for the quarter, beating the Thomson Reuters’ consensus estimate of $5.47 by $1.59. O’Reilly Automotive had a return on equity of 373.35% and a net margin of 14.96%. The business had revenue of $3.09 billion for the quarter, compared to the consensus estimate of $2.80 billion. During the same quarter in the previous year, the business earned $3.97 EPS. The company’s quarterly revenue was up 24.8% compared to the same quarter last year. As a group, research analysts anticipate that O’Reilly Automotive will post 23.13 EPS for the current fiscal year.

O’Reilly Automotive announced that its board has initiated a share repurchase plan on Wednesday, February 10th that authorizes the company to repurchase $1.00 billion in shares. This repurchase authorization authorizes the specialty retailer to purchase up to 3% of its stock through open market purchases. Stock repurchase plans are typically a sign that the company’s board of directors believes its shares are undervalued.

Read More: What are different types of coverage ratios? 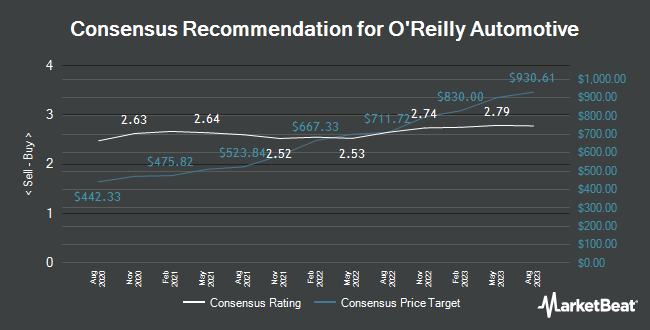 This instant news alert was generated by narrative science technology and financial data from MarketBeat in order to provide readers with the fastest and most accurate reporting. This story was reviewed by MarketBeat’s editorial team prior to publication. Please send any questions or comments about this story to [email protected]

7 Stocks to Watch When Student Debt Forgiveness Gets Passed

Now that the Biden administration is fully in charge, student debt forgiveness has moved to the front burner. Consider these numbers. There is an estimated $1.7 trillion in student debt. The average student carries approximately $30,000 in student loans.

If $10,000 of student debt were to be canceled, there are estimates that one-third of borrowers (between 15 million to 16.3 million) would become debt-free. Of course, if the number hits $50,000 as some lawmakers are suggesting the impact would even greater.

Putting aside personal thoughts on the wisdom of pursuing this path, it has the potential to unleash a substantial stimulus into the economy.

And as an investor, it’s fair to ask where that money would go. After all, there’s no harm in having investors profit from this stimulus as well.

A counter-argument is that the absence of one monthly payment may not provide enough money to make an impact. However, Senator Elizabeth Warren referred to the effect student loans have in preventing many in the millennial and Gen-Z generations from pursuing big picture life goals such as buying a house, starting a business, or starting a family.

With that in mind, we’ve put together this special presentation that looks at 7 stocks that are likely to benefit if borrowers are set free from the burden of student loans.

View the “7 Stocks to Watch When Student Debt Forgiveness Gets Passed”.